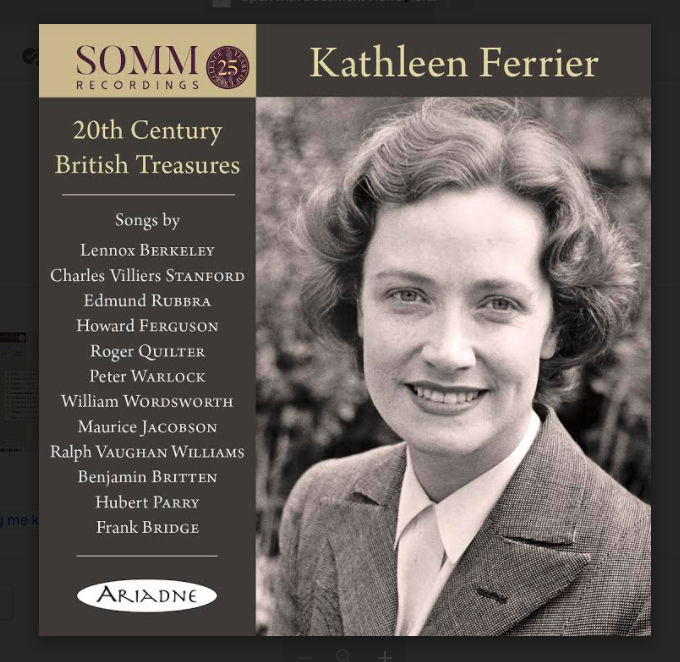 A collection of some of Kathleen Ferrier’s repertoire from British composers. The earliest recording from1947, is of Benjamin Britten’s ‘The Flower Song’ from The Rape of Lucretia, the latest, from 1953 (both BBC recitals) includes Howard Ferguson’s lovely five part Discovery, three songs by William Wordsworth and Edmund Rubbra’s Three Psalms, specially written for Ferrier. 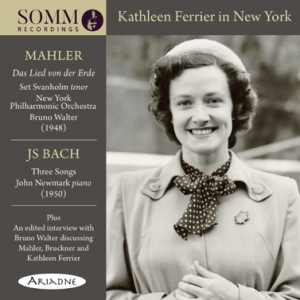 Kathleen Ferrier in New York, features historic performances of Mahler and Bach by the much-loved contralto during her triumphant visits to the United States in 1948 and 1950.
Recorded live on Ferrier’s only appearances in Carnegie Hall in January 1948, four months after her acclaimed performance at the inaugural Edinburgh International Festival, Mahler’s Das Lied von der Erde reunited her with the conductor Bruno Walter and saw her making first appearances with tenor Set Svanholm and the New York Philharmonic Orchestra.
Gramophone Magazine Editor’s Choice – February 2020!

Re-mastered by Norman White and Adrian Tuddenham, this remarkable account pre-dates Ferrier’s often-reissued 1952 recording by four years and finds her in exhilarating fresh voice – a vivid, vital display of a great artist at her peak.
Accompanied by pianist John Newmark in New York’s Town Hall in 1950, three songs by JS Bach – Vergiss mein nicht (BWV 505), Ach dass nicht die letzte Stunde (BWV 439) and his arrangement of Gottfried Stölzel’s Bist du bei mir (BWV 508) – are taken from Ferrier’s final visit to the US.
Also included are excerpts from a revealing 80th birthday interview with Bruno Walter in which he discusses his friendship and collaborations with Mahler and recalls his first meeting and subsequent association with Kathleen Ferrier.
Illuminating booklet notes are provided by Ferrier authority and discographer Paul Campion, who also compiled the disc.
SOMM’s previous Ferrier releases include Bach’s Mass in B minor (Ariadne 5000-2), songs by Brahms, Chausson and Mahler (SOMMCD 075) and Kathleen Ferrier Remembered, a first release of BBC Radio recordings of Lieder and British songs (SOMMCD 264). Kathleen Ferrier in Celebration of Bach (Ariadne 5004) was acclaimed by Gramophone as “an important addition to Ferrier’s discography… one of the most beautiful things she ever committed to disc”. 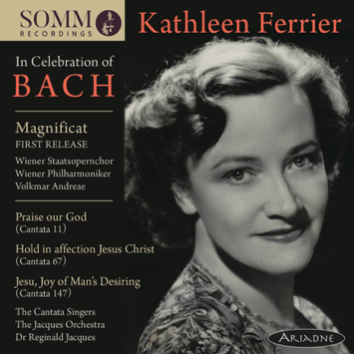 Kathleen Ferrier: In Celebration of Bach, a collection of historic performances with Britain’s favourite classical singer of the 20th century very much the star attraction.
It includes the first appearance on disc of Ferrier singing Magnificat, with the Vienna Philharmonic conducted by Volkmar Andreae in the Grosser Musikvereinssaal, from the legendary 1950 International Bach Festival.
A rarity in Ferrier’s repertoire – she had
sung it only once before and was never to again – the Magnificat was a work the much-loved singer felt a close affinity, joyfully declaring “Oh! The Magnificat –I am in my element in this sort of music!”
The occasion was a significant one for the
Singer, as Ferrier authority Paul Campion notes in his extensive, detailed and informative booklet notes.

“It was a considerable honour for Ferrier to be invited….what was quite astonishing was that of all the 15 soloists taking part [she] was the only non-native German speaker….. Her international success was indeed at its zenith.”
London’s fabled Kingsway Hall provides the venue for two memorable Cantata performances – no. 11, Praise our God, and no. 67, Hold in affection Jesus Christ – recorded by Ferrier in 1949 with tenor William Herbert, bass William Parsons and Dr Reginald Jacques’ Cantata Singers and bewitching encore in the sublime Jesus, Joy of Man’s Desiring. 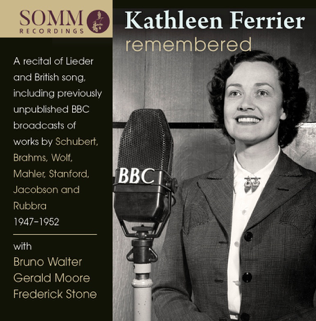 Remembering Kathleen Ferrier: A collection of German Lieder and British songs, including 19 previously unpublished tracks: 1947-1952, with Bruno Walter, Gerald Moore and Frederick Stone. Kathleen Ferrier’s legacy of recordings has been well-known and widely-admired for over 60 years. So it seems amazing that, after so long, a treasury of previously unpublished and little-circulated BBC broadcasts is now being released. In typical fashion, SOMM leads the way in remembering great composers and artists of the past.

These recordings are from two sources. Several are from the BBC’s own archives and include Ferrier’s first broadcast of Rubbra’s Three Psalms Op. 61, of which she was the dedicatee, five Schubert Lieder, four by Brahms and Parry’s Love is a Bable, recorded at the 1948 Edinburgh Festival, which makes a delightful conclusion to the CD. The other source is the remarkable collection of Kenneth Leech, a composer and engineer who, from the 1930s to the 1950s, recorded numerous broadcasts, mainly using Bakelite and metal discs – the usual way for an enthusiast to preserve radio programmes at that time. This collection is stored at the National Sound Archive in the British Library.

These recorded performances are immensely valuable, as they allow us, so many years later, to hear several songs that Ferrier never set down commercially – including Brahms’ Nachtigall – as well as others that can be now compared with their commercially-made counterparts. So we can hear her sing Lieder by Schubert and Brahms and songs by Stanford and Jacobson which have never before been issued. Technically Leech’s discs do not match the standards of Ferrier’s Decca recordings but with the dedication and expertise of sound engineer Ted Kendall, they have been given new life and offer us a more complete view of Ferrier, the song- and Lieder- singer. It has been a labour of love to restore Ferrier’s voice in this music, which lay at the very core of her repertoire. Ferrier’s accompanists on this CD are three of her friends and valued collaborators –Bruno Walter, Gerald Moore and Frederick Stone. Their contributions to this recital are very considerable.